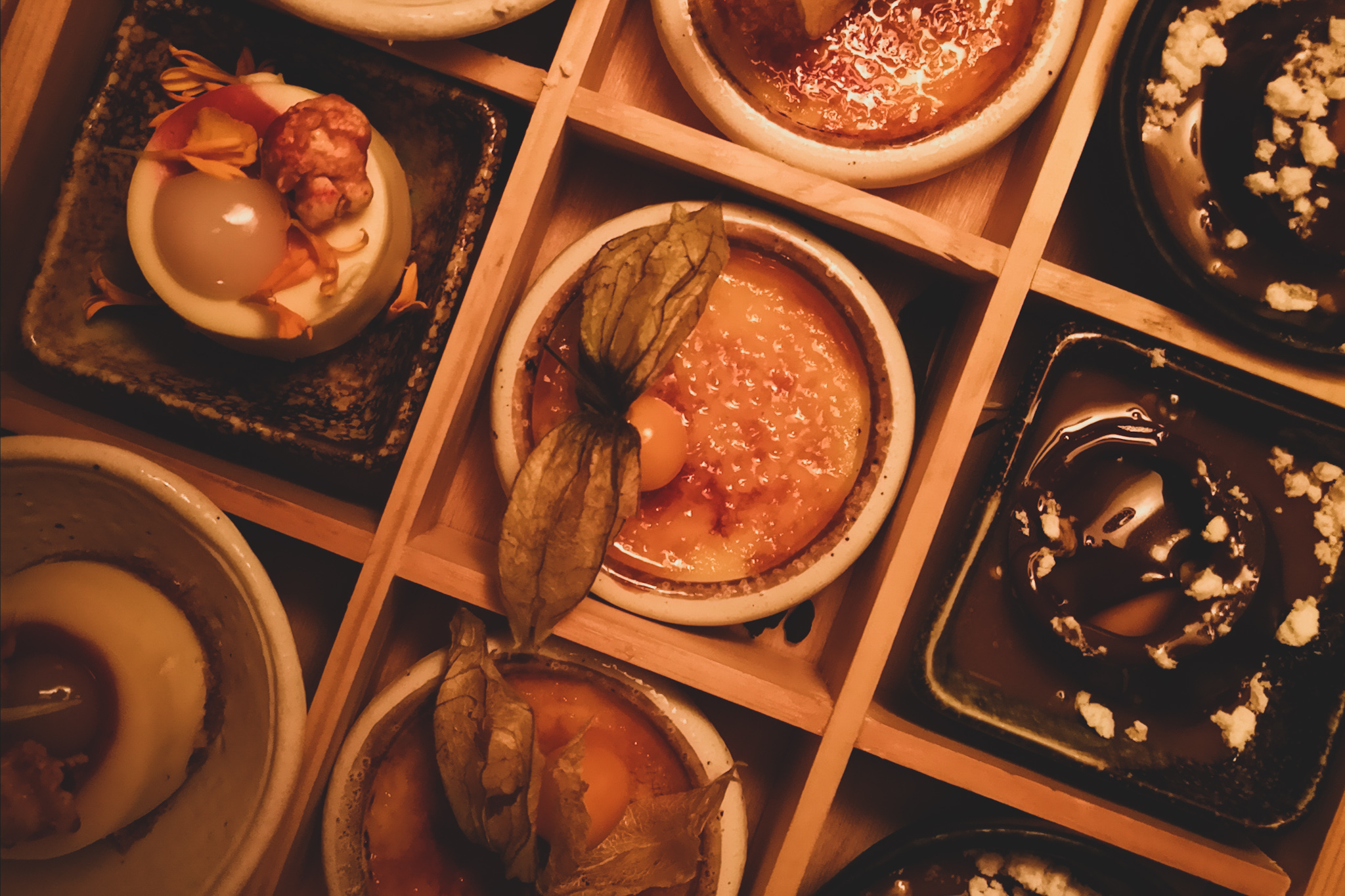 Australasia Manchester hosted the most recent WeBlogNorth meet up, which nicely coincided with the launch of their amazing Autumn menu!

Unless you know where it is, you will be forgiven if you walk past it.

If you are familiar with Manchester and specifically Deansgate/Spinningfields, then you will know that Australasia is situated below ground level. The only sign of its whereabouts is a glass prism jutting out of the ground which is the entrance. Stairs take you downstairs where you are greeted with an all-white, natural interior. It is stunning! 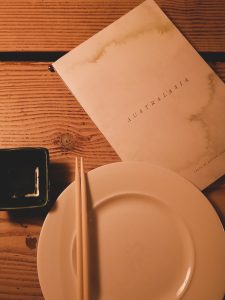 I have been many times to Australasia when I was kid-free and living it up in Manchester City Centre. Each time I have never been disappointed with the food. It is delicious – a fusion between Australia, Japan, Indonesia – and last week was no exception.

We were treated to their Taste of Australasia menu which was brought to us in waves.

A board was brought out with various sushi on it and we were invited to pour soy sauce into our individual ramekins and take what we wanted of the pickled ginger and wasabi. I am a wasabi fiend so I took quite a bit of this – I like it when I feel like my nose hairs are going to fall out! 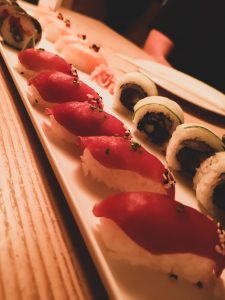 The sushi platter was amazing! 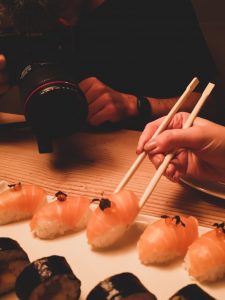 I had never heard of robata but it is a style of Japanese cooking where food is barbecued over hot charcoal. We were brought skewers of prawns [which were huge!] and meat to the table and we dived in – they were spicy but absolutely gorgeous! We also ate steamed edamame with a sweet dressing over them which was a great counterbalance to the spice. 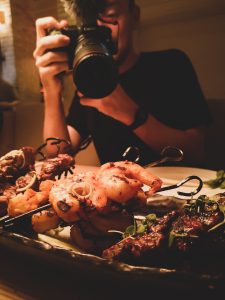 The Robata skewers – and this is how bloggers dine!

I thought our meal was done then and I was gearing up for my pudding belly to go full throttle and then the waiters brought the “main meal”. Oh my god! I was regretting the slice of fruit loaf I had eaten at home before I left because I was seriously running out of space.

Obviously I had to try it all. The chicken was glorious – especially the panko leg which was nice and spicy. It also came with a sesame gravy which was also really tasty. I love fish and the sea bass was beautiful – really succulent and the pomegranate seeds and mango strips gave it a real freshness.

Sweet baby Jesus the mash was absolutely delightful – I would have had a dish of that on its own and been happy! 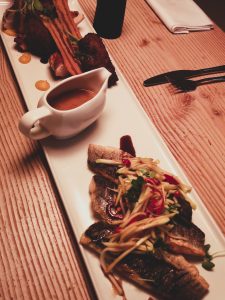 I am a sweet person [in all senses of the word!] and I love a pudding. I would rather forego a starter and fit in a dessert every time. Dessert for me is where chefs can be really creative and let the theatre/magic happen.

In the past, I always always used to order the mango souffle here which is just stunning. A little glass teapot came filled with a passionfruit sauce that you poured into the steaming pudding. It was divine! You can probably tell I was excited to see what they were going to bring out to showcase their new Autumn menu…

We were treated to a grid box of mini desserts. There were three each [yep, three. Seriously regretting that fruit loaf!] and they were taste sensations! I loved the chocolate dessert – a chocolate bomb which had hot sauce poured onto it by the waitress – bit of theatre there, but my favourite was the cheesecake! It was so fresh and fruity, just what was needed after the massive meal I had just consumed! 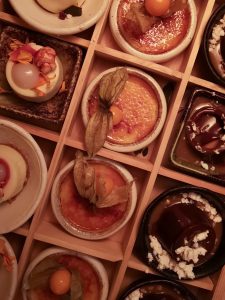 The dessert selection was divine!

I nearly forgot to tell you about the cocktails that we were also treated to! Australasia has a fantastic reputation for their cocktails [I always order the lychee martini when I go – it’s lush!] and these new creations were really lovely. I was driving so allowed myself one at the beginning of the night, a green apply martini and then went onto the mocktails, which were watermelon lemonade and a coconut and mango ice cream [which was glorious!] 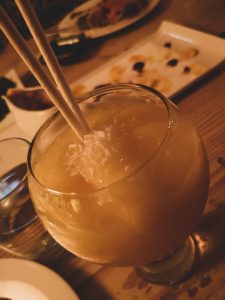 This was a dessert in itself!

It was a fabulous night catching up with some of my favourite WeBloggers. Lots of laughs were had and my tastebuds were well and truly treated. The staff at Australasia Manchester were delightful and went the extra mile for us all. I want to say a big thank you to them for hosting us and letting us try their menu – I will definitely be coming again and bringing The Beard aka the husband with me!

This meal was gifted by Australasia Manchester as part of the WeBlogNorth catch up. There was no requirement to post anything to social or write this blog post but I have done. All views are my own. 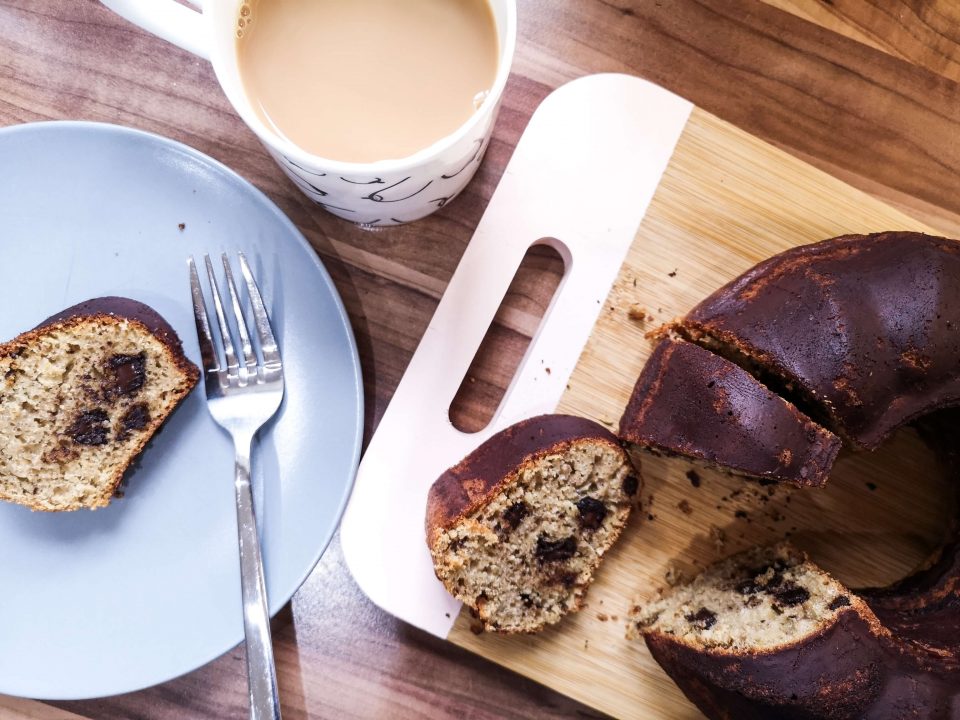 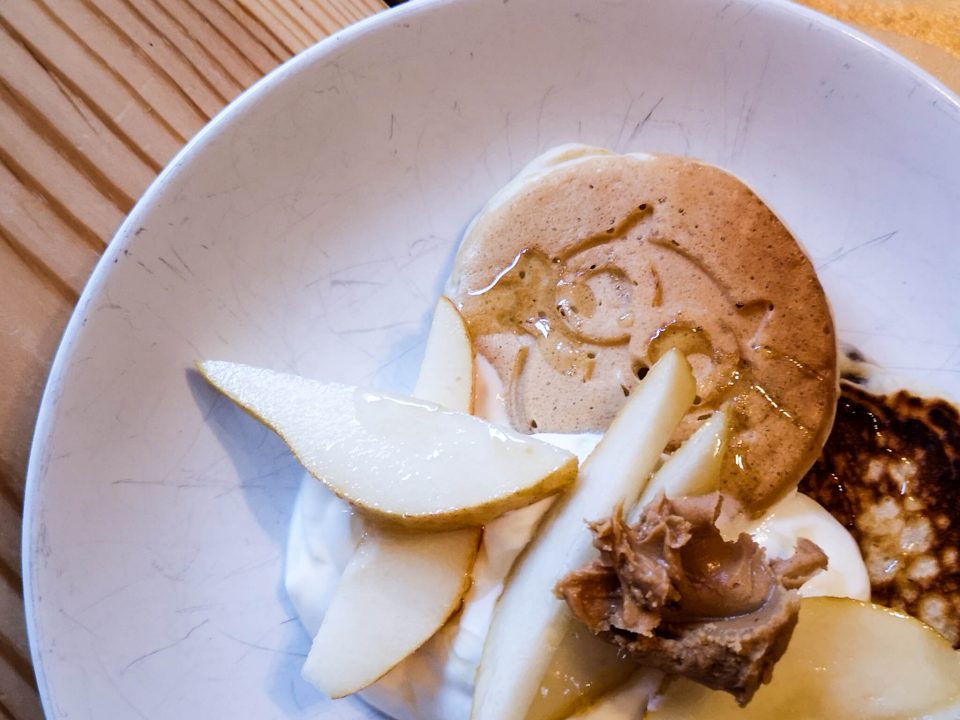 The finished pancake! We served this with pears, yoghurt & peanut butter. Yum!