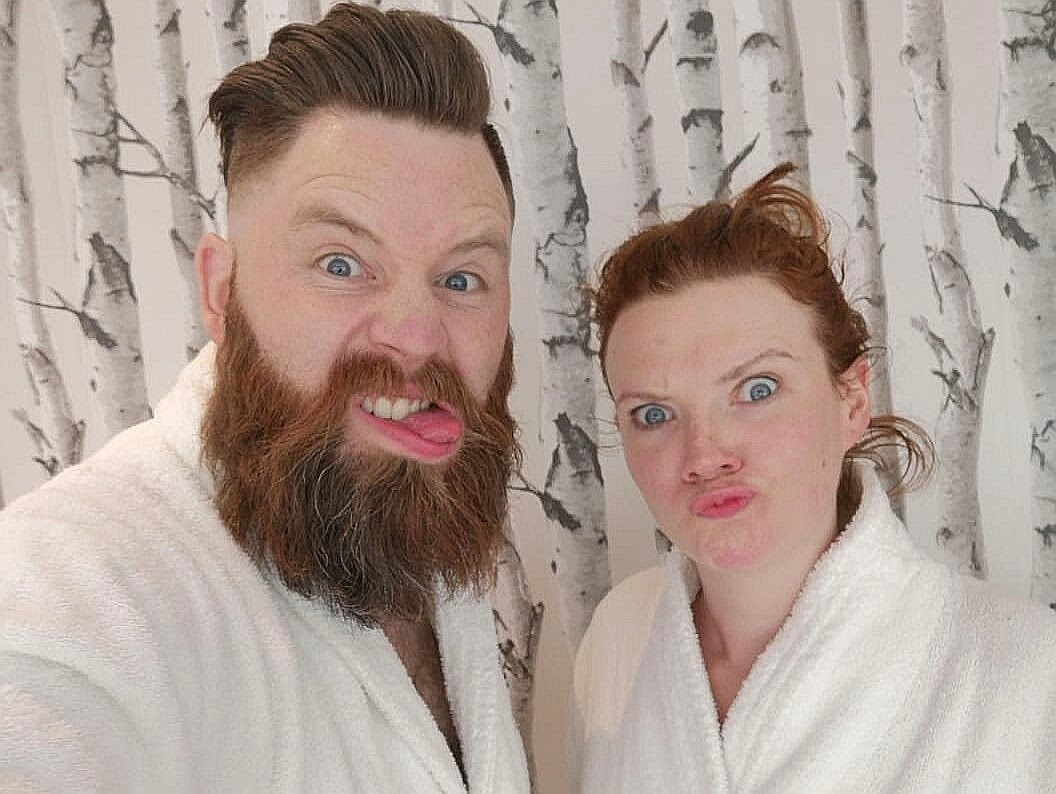 Throw in two young children, stressful jobs, a new business, a bit of a mental struggle [which means I can be a bit of a bitch…no, really!] not to mention lots of other factors and sometimes you find yourself not having spoken to each other properly in yonks.

This is why time away from everything is so important in order to reconnect with each other.

The other weekend we did just that. Kristian bought me a spa break for two back in December that I had not got round to booking, so after a stressful couple of weeks I did just that! Granny was drafted in to look after the kids [first time yikes! but this woman has had four kids herself so I thought she was more than capable of looking after my little stockubes].

We were released from our parenting duties for 24 hours!

We had booked a one night stay at the Macdonald Craxton Wood Hotel and Spa through Spa breaks. The package included a spa treatment each, use of all facilities, a three course dinner and breakfast. 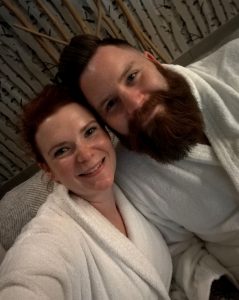 Kris had chosen the intense deep body massage which was well needed [apparently]. I can’t really speak for him but he came out of the room with a nice smile on his face…that sounds slightly dodgy but you get what I mean!

I had chosen the superfood facial but I was offered half and half – a top half body massage and a pro collagen facial which I took up!

The massage was first and it was great. It hurt in places – the masseuse explained to me that I was incredibly knotty down one side of my back [possibly due to carrying kids on my hip] and my shoulders were very firm possibly caused by stress! She managed to release some of the tension but told me I should be having regular massages to help that area. Obviously I can’t argue with a professional so more massages for me it is…maybe.

The hotel spa promotes Elemis and I used their products on my pregnancy tummy so I have had some experience of them. I was treated to a pro collagen facial and it was sublime! I’ll be honest, I cannot remember what was put on my face other than the cleansing balm and the eye masks, but all manner of other lotions were massaged into my skin. The result was that my skin was dewy and soft AND I didn’t need to put any makeup on my skin when we went to dinner [see the photo below…obviously I have eye makeup on!] 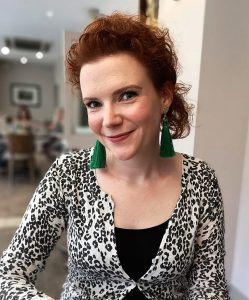 No makeup on the skin!

This had recently undergone a renovation and it was lush! The staff in there were lovely and really knowledgeable [the poor woman doing my facial had sooo many questions to answer!]

After we had finished our treatments we were led to a tranquillity room, which was a darkened room with soft music playing and beds lined up. We both fell asleep needless to say but it gave us time for the aromatherapy oils to sink into the skin. 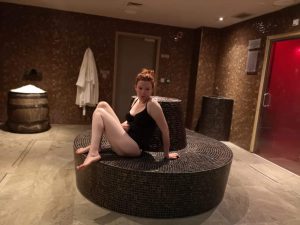 Relaxing in the spa area

The spa offered a swimming pool, aromatherapy steam room [which I loved], foot spa, experience showers [not really sure on that one], two types of sauna and we chose to buy an extra spa treatment which was hilarious! This was the mud experience. 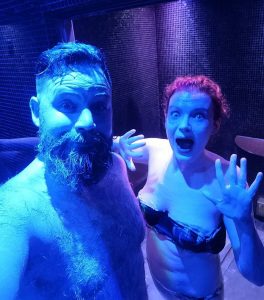 We were given a gin and tonic salt scrub which smelled so good and were told to rub it all over our skin to shed the dead skin cells [yuk]. After we had washed this off we covered ourselves in mud and then sat in a sauna for 40 minutes. It was so lovely just to sit, the two of us with nobody else around and talk, looking like mud monsters! After the time was up we washed it all off [this was a mission!] I would definitely have this treatment again because our skin was so soft and moisturised afterwards.

I was expecting something special because I had read some reviews which said that the food was sensational! I was not disappointed. The menu gave nothing away either. 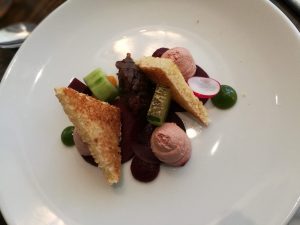 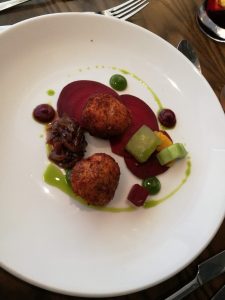 I chose the pate to start with – Kris chose the goats cheese risotto [or I made him so that we could share!] 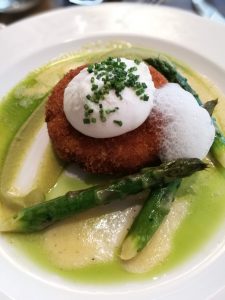 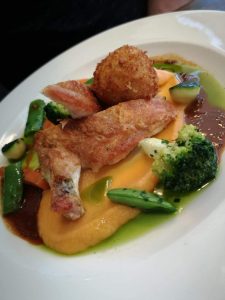 The mains were so tasty and so beautifully presented too. I fancied fish so went with the fish cake and Kris chose the chicken. 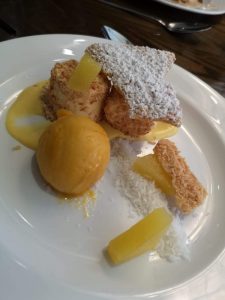 Coconut and pineapple delight [I gave it that name!] 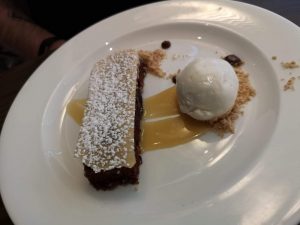 Desserts were scrummy. Kris has this rule that if we go out anywhere and sticky toffee pudding is on the menu then he has to order it. Yep. I usually eye roll when I see it written on the menu. So he ordered it, it came out and I was pleasantly surprised. It wasn’t overly sweet or dense [and if I’m honest it was nicer than mine…only by a smidgen though!] Mine was a fruity affair…if you like coconut then this would have been right up your street!

Oh my lord! I ate far far far too much for breakfast but I was like a kid in a candy store! There was home made granola, fresh fruit, yoghurts, fresh bread, pastries [a weakness of mine] on offer so I filled up my plate, only to be told that I needed to order a hot meal too! So I ordered an omelette rather than a full on breakfast and this was lovely too! So impressed.

The spa experience as a couple was fantastic! This was his first time and I think he really loved it! The treatments, the spa and the food were amazing as were the staff. The only thing that let the place down were the rooms. Don’t get me wrong – the beds were comfy but the decor was just a bit 1990’s corporate. A bit dated. 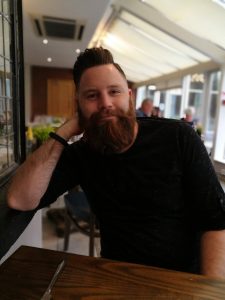 Spending time with this guy was lovely

We will make this is a regular thing – going away together for a night or even having a dinner out once a month. It reminds us that we do actually still like each other and have things in common. In the meantime, until the next date, we will go back to arguing about who has to change the next shitty nappy, what we will eat for dinner and crashing in front of the tv after busy days! Such is life!!!